“When my doctor indicated to me in December of 1981 that I was
immune deficient I said, “What does that mean?” And he said,
“We don’t know.”

“The effect of being told that I was immune deficient was devastating. I called my parents and said “I am going to die.”

(Two statements by Michael Callen, who was diagnosed with HIV in 1981 during the subcommittee hearing on AIDS)

The magnitude of the AIDS epidemic could not be overstated. In the United States the first case of AIDS would emerge in 1981 as an immune system failure. This period of panic was not only seen in the United States, but in the Soviet Union as well. While we tend to view these two superpowers as being opposites we see a similar response to the spread of AIDS and a similar labeling of “high risk” groups.

In 1985 speculations in the Soviet Union began to arise as to the cause of the AIDS epidemic. The author Zapevalov, notes that as of October of 1985 over 13,000 cases of AIDS had been recorded in the United States, however he estimates the reality is that at least 500,000 Americans are infected. Zapevalov speculates that the AIDS epidemic was state sponsored in order to test new biological weapons. By unknowingly administering this disease to “high risk” groups which were universally defined as primarily homosexuals, drug addicts, and prostitutes, the Center for Disease Control could test the spread of biological weapons in densely populated areas. (Zapevalov 16)

While this article appears rather fanatical, using the church of scientology as a credible source for the United States goverment affairs, it does illuminate an international opinion on the AIDS epidemic. AIDS was a mystery to nearly everyone. With this deep mystery and fear came stigmatization. AIDS became the “gay” disease. A disease to eliminate these populations of outcasts. In 1987 a group of Soviet Union doctors released a statement on the rise in AIDS “We are convinced that within a short time AIDS will destroy all drug addicts, homosexuals and prostitutes…. Long live AIDS!” Not only was AIDS spreading rapidly and mysteriously, some in positions of power viewed the epidemic as a response to moral collapse. By defining this disease as only being contracted by homosexuals and drug addicts the government response, in both the United States and the Soviet Union was minimal. (Novikov 17)

In 1988 as the AIDS epidemic continued to spread at near unimaginable rates the Soviet Union continued to define the most at risk group for contracting diseases as the outcasts of society. The homosexual, the drug addict, and the prostitute. “It must be acknowledged that homosexuality is, above all, a medical, social, and moral problem.” (Ignatov 25) This stigmatization continued to lead many to turn a blind eye to the epidemic that ravaged communities across the globe.

However,  months after this article we see a different tone in the discussion of AIDS. Largely due to a woman from Leningrad died from the disease. She was worker and student, who after dying from the disease, was revealed to be a prostitute for “often foreign clients.”(Tutorskaya 23)  This incident sparked a demand for better technologies and accessibility to better testing methods, and reveals that AIDS could no longer be stereotyped as the “gay” disease.

The stigmatization of AIDS in both the United States and the Soviet Union allowed the epidemic to continue to destroy communities that the governments both deemed to be socially immoral. AIDS is still heavily stigmatized, silenced, and is still an emotional topic for everyone in LGBT spaces. In 2015 the total number of deaths caused by AIDS reached over 658,000 people. The stigmatization has not ended, currently in the United States, men who have been sexually active with a male partner within the last 12 months are not allowed to donate blood, regardless of testing and under the Red Cross FAQ the “High Risk” identity remains seen below: 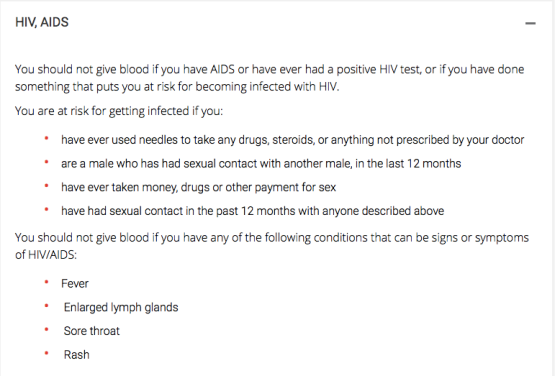 This screenshot taken on April 29, 2018 from the American Red Cross FAQ section shows the stigmatization of AIDS, for over 30 years the three groups stigmatized as high risk and dangerous to public health are drug addicts, homosexuals, and sex workers.

Look: the Timeline of AIDS

View all posts by whitlockg

7 thoughts on “AIDS and the “high-risk” group.”

This work is licensed under a Creative Commons Attribution 4.0 International License.